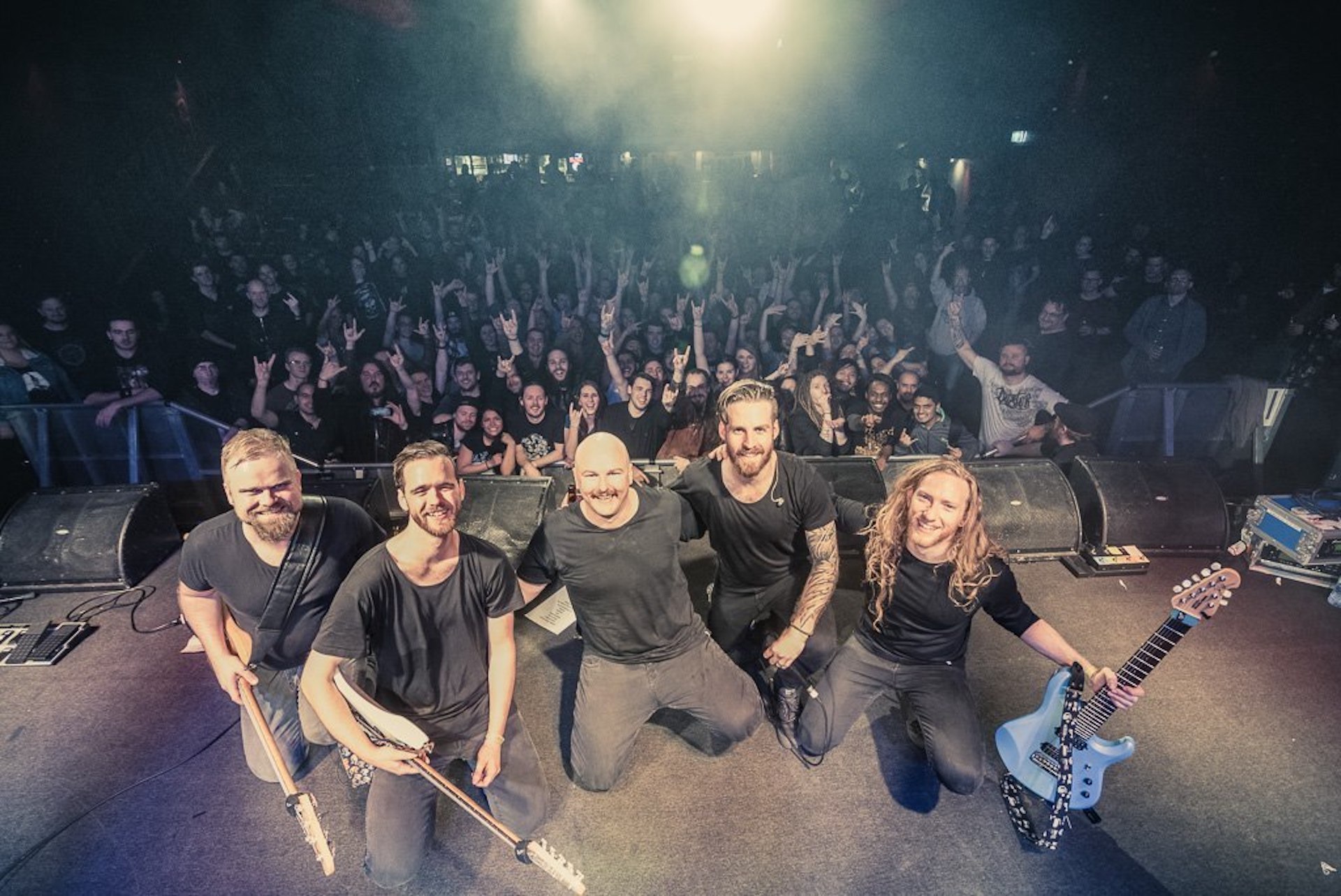 Posted at 08:27h in Media Release by Caligula's Horse

There are few bands who can boast the kind of staggering seven-string talents displayed by Sam Vallen, virtuoso founder of Aussie prog-metallers Caligula’s Horse.

Equally adept at wielding harmonically ingenious extended chords and lightning-quick hemi-semi-demi-quaver runs, Sam has established himself as one of this generation’s players to watch – if your retinas can keep up, of course.

As the band celebrate the release of fourth album, In Contact, we caught up with Sam to hear all about the gear he’s loved and lost over the years, the players who continue to capture his imagination, and one of the tastiest chord voicings we’ve heard in some time…

1. What was your first guitar and when did you get it?

“My first guitar was a Washburn Mercury series. My dad gave it to me when I was perhaps 13 or 14. I loved that guitar, and, funnily enough, it’s still sitting in my wardrobe in disassembled pieces. It’d take a lot to get it running again, but I’m a sentimental guy, so who knows…”

2. The building’s burning down – what one guitar do you save?

“My Gibson L6-S. Again, sentimentality. I’ve had it for a long time and it’s a very special instrument to me, even if it doesn’t get played a whole lot. My Music Man JP7 is the guitar I play 99 per cent of the time, and the guitar that’s been with me around the world (I only own three electric guitars; I’ve never been a hoarder), but the Gibson is irreplaceable.”

3. What’s the one effects pedal you couldn’t do without, and why?

“I don’t really use pedals these days! Since getting a Fractal Axe-Fx around 2010, I haven’t obsessed with gear whatsoever – it makes it all easy! With that in mind, I’d have to say my Fractal AX8 – carrying my whole live rig in two hands is incredibly liberating when you tour as much as I do!”

4. Is there a guitar, or piece of gear, that you regret letting go?

“I owned a beautiful Mesa Mark I reissue for a while that I definitely miss. Not a flexible amp, nor one suited to the many tonal needs of Caligula’s Horse, but one that I had fun every time I powered on. It went to a good home, and I’m fortunate enough to borrow it now and again.”

5. What’s your favourite chord, and why?

“Now here’s a question I can get in to! I wrote my honours thesis back in 2013 on Steely Dan’s harmonic vocabulary, and I don’t think you’ll find a heavy band out there who use as many mu chords as Caligula’s Horse do for that reason!

“Fitting pretty, ornamental chords into heavier music has become a bit of a challenge for me, and perhaps something I overdo, but this is mainly because I’m such a geek for that stuff.

“So I guess I’d have to say that my current favourite changes constantly… Right now, it’s a specific six-string voicing of a minor 9 chord, one that I think is very much my own, and one that appears all throughout Bloom and In Contact. It’s voiced something like this (if it were in E minor): 12th fret on the low E, 14th fret (played with the second finger) on the A, 12 on the D, 12 on the G, 15 on the B, and 14 on the high E.

“It’s great because it (mostly) divides the triad and the extension over two octaves, really dramatising the bittersweet connotation of the chord. Check out the song Graves on In Contact for some overuse of that voicing.”

6. Is there an aspect of guitar playing that you’d like to be better at?

“Many, I’m sure. Lately I’ve been focusing on a smoother, more consistent legato technique. I’ve always been a fan of the flowing and rhythmically unpredictable phrasing of players like Allan Holdsworth and Greg Howe (two very different examples, I know), but I’ve spent many years working on my picking technique instead. I’ve been blown away by Rick Graham’s treatment of legato, and his shockingly adept chops have inspired me to sit down and work harder on that approach.”

7. If you could have a guitar lesson from one guitarist, dead or alive, who would it be, and why?

“Allan Holdsworth, absolutely without a doubt. Just to sit in the room and watch him play would have been an inspiration.”

8. What item of gear would you take with you to a desert island?

“Well… You need power for a guitar rig, and strings would rust and break fairly quickly with all of that salt air, so… A nylon-string acoustic I guess? I’ve never been much good with them, though… Maybe that would be my chance to learn.”

9. What’s the worst thing that’s ever happened to you onstage?

“I’ve had few onstage disasters. My band works pretty hard to minimise the chance of those things occurring. I’ve broken a couple of strings over the years, but that happens and you get on with it. I still remember a particularly badly organised and run show where the power to front of house died in the middle of our set, leaving us with no lights and no sound reinforcement – only the cabs and the drum kit remained. You live, you learn.”

10. What advice would you give your younger self about playing the guitar?

“It’s easy to get competitive as a young guitar player, to learn and practise certain things because that’s ostensibly the process you need to overcome to be ‘good’.

“I wouldn’t change anything in what I’ve practised and what I’ve focused on; the music I make in my band is exactly what I fantasised about as a young teenager with a practice amp and a cheap guitar, and the experiences it has brought me are well beyond my adolescent hopes already. But I wish I’d approached it with a more artistically driven and positive mindset in the early years. That’s definitely something I now hold as far more important than my chops.”